Born in São Paulo on October 20, 1932, Jorge Mori specializes in painting, drawing, and engraving. Mori began his art career at the tender age of 12 under the tutelage of painter Yoshiya Takaoka (1909-1978), considered one of the pioneers of Nipo-Brazilian art. By age 14, Mori already had his first individual exhibit (at the Galeria Itá in São Paulo) under his belt, and was already exhibiting his work alongside prominent artists like Anita Malfatti, Takaoka, and Walter Shigeto Tanaka. In 1954 the artist traveled to Paris to advance his studies in painting, fresco, and mosaic at the École Nationale des Beaux-Artes, but soon gave up formal instruction to turn to the great masters Paolo Uccello, Fra Angelico and Sandro Botticelli––by diligently copying their works at the L’ouvre. Mori even spent 12 years during his time in Paris reproducing to perfection Uccello’s Battle of San Romano. In 1979, after over two decades in Paris, Mori returned to Brazil.

Jorge Mori’s works consist of portraits and self portraits, diverse Brazilian city and country-scapes alike, nature, and still-life. His style is expressionistic and fauvist early on, but then shifts to what he has described as a “realismo poético [poetic realism]” as he became increasingly critical of modern art, in contrast with many of his contemporaries like Flávio Shiró and Manabu Mabe. Aracy Amaral points to Mori’s devotion to the Renaissance greats as one of the factors that led to his privileging realism and mannerism. 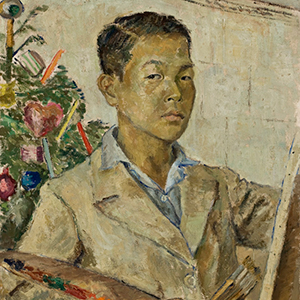 View the gallery to see Jorge Mori’s paintings over the years.

How do we categorize artists?
To what extent does a network form a social identity?
To what extent do these artists form part of an art school because of their Japanese identity vs. their artistic style? What role does Japanese-ness play in these artists’ works?
How do global geographies––the prominence of Paris as a place of burgeoning ideas and aesthetic exchange––shape artists’ work?

What creates an artist’s legacy? Why are Tomie Ohtake, Manabu Mabe, and Flávio Shiró so prominently remembered, whereas Jorge Mori faded away from the public eye after his earlier years as a painting prodigy?

This timeline map highlights important events in Jorge Mori’s life (birth, travels, exhibitions, artistic trajectories) within a greater context of art movements and history during the time period, including Japanese immigration to Brazil, the emergence of Japanese Brazilian artists in the public eye, and the immense cultural shifts that took place through Brazilian Modernism. Through placing events in the timeline that are not directly related to Mori’s life––such as Tomoo Handa’s meeting Mário de Andrade––I cast Mori’s work in the light of a panorama of artistic, literary and cultural movements of the period.