Based in Recife, Brazil, Jonathas de Andrade (b. 1982) is a photographer, videographer, and installation artist whose work critiques the racial and economic inequalities crosscutting Brazilian national identity. Having come of age during a period of military rule and severe economic recession, de Andrade uses his artistic practice to unravel the collective memories and precarious embodiments elided through nationalist discourses of “racial democracy” and “emerging economies.” De Andrade’s work often shows how the naturalization of aesthetic categories is part and parcel of national racial projects, especially those carried out under the banner of “redevelopment.” Specifically, his video works combine artifice, spectacle, and the delivery of incomplete information to critique a stratified social order and to expose the forms of visual and epistemic privilege structuring Brazilian society. In doing so, his work exposes dominant visualities as themselves artifices requiring ongoing material and epistemic violence in order to be maintained.

In this chapter, I show how de Andrade’s artistic practice elaborates upon the co-constitution of race and animality in the Brazilian context. I do so with the goal of taking up Zeb Tortorici and Martha Few (2013)’s call “to counteract the relative invisibility of animals in Latin American historiography” (5), and to express the organizing function of animality within projects of racial formation. Two of de Andrade’s video works in particular illuminate the centrality of processes of animalization to neoliberal models of (re)development as well as ethnographic documentations of racial difference. The first, O levante [The Uprising] (2013), was recently on display at the Museum of Modern Art as part of the exhibition “Unfinished Conversations”; the second, O peixe [The Fish] (2016), was recently shown at the New Museum. In their foregrounding of animal proximities and dependencies, the two videos initiate what Sara Ahmed (2006) describes as “queer moments of disorientation”; in doing so, they throw into crisis the apparent necessity of the prevailing visual order.

For O levante, de Andrade organized and filmed the first horse-drawn cart race in the commercial district of Recife, a northeastern Brazilian city with a burgeoning film industry and high levels of economic inequality. Recife is characterized by a stark division between its rural poor, who live in favelas on the city’s outskirts, and its middle and upper class who reside in the city’s industrial and commercial center. Monique Vuijten, Martijn Koster, and Peter de Vries (2012) describe the city in the following terms: “Recife presents an urban landscape of highly protected middle class neighborhoods juxtaposed against deprived squatter settlements – the favelas that have been home to over half the populations since 1939″ (159). O levante was shot in response to a city ordinance prohibiting farm animals on the city streets, which effectively criminalized poorer residents’ primary way of transporting goods.

By staging a horse-drawn cart race in the center of the city, de Andrade inserts an explosion of animality into the modernist cityscape. In doing so, he calls attention to the ways in which urban aesthetics become racialized, producing vastly different perspectives and experiences of urban space. De Andrade filmed the race to emphasize the city’s accelerating urban/rural disparity, and to articulate how this racialized economic disparity rests upon the (in)visibility of animal labor. In the video, hundreds of horses and cart drivers take to the streets, re-centering the “impure” materiality of Brazil’s rural poor within the cultural and economic center. According to Richard Ballard (2010), “When animals are seen to breach their appropriate spacing, they are cast as out of place and may, like other impurities, be the object of revulsion” (1075). O levante documents the breaching of this appropriate animal spacing, rendering economic precarity sensible through an animal insurrection in the visual field. 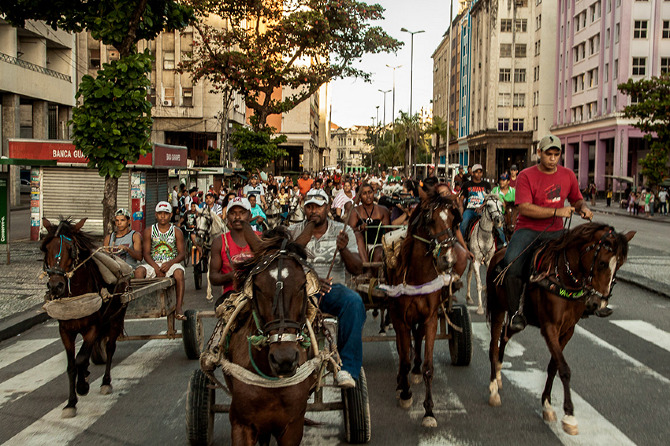 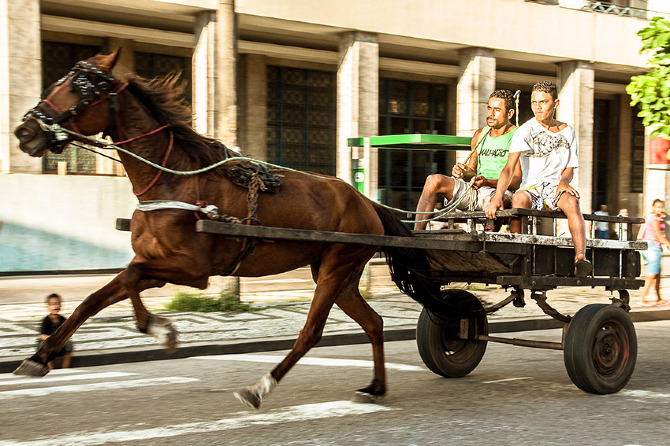 After decades of racist slum clearing and gentrification programs, compounded by this recent zoophobic city ordinance, Recife’s horse owners (or those who rely on horses to survive) become racialized as the unwanted others of a modernist urban aesthetic. But in O levante, couched in the language of artistic liberty, horses and their owners are allowed to dominate the visual field once again. De Andrade told the rural horse owners that they would be participating in a genuine competition, but in actuality, de Andrade could only legally organize the race by convincing Recife’s municipal authorities that he was filming a scene for a fictional feature film. Thus, whereas the race feels real to its participants, it is only the event’s alleged artifice in the eyes of Recife’s authorities that permits its very existence. On his website, the artist remarks, “[T]his contradiction is tantamount to a madness that is very revealing of the forces and ideologies present in the city.” Indeed, it is only de Andrade’s privileged status as an established cultural producer that allows the race to materialize in the first place. The city only tolerates this display of animality because it is presented as “fictional,” and thus unthreatening to the prevailing social/visual order.

In this case, art was what made it possible to have the node that meshed concreteness and invisibility, marginality and celebration, impossibility and insurrection, illegality and fiction. It was art that sparked off something that was absolutely uncertain and quite risky which would bring the men with carts and horses for a race through the city.

In this choreography of “uprising,” the very disruption posed by animal life emerges as a decolonial aesthetic practice capable of challenging the normative partitioning of bodies anxiously reiterated through the violence of neoliberalism. Indeed, as Gabriel Giorgi and Karen Pinkus (2006) argue, “The neoliberal politics of space thus reflects this more fundamental, biopolitical division between the ‘human’ and the ‘less than human'” (103). By foregrounding animal proximity as itself a metric of raciality and economic marginalization, de Andrade’s video re-centers the forms of bare life systematically excluded from racialized economic circuits. Attending to the cross-species affiliations absented within neoliberal modes of visuality, O levante inscribes the horse owners within public space precisely as the unwanted others of neoliberal visuality. Rather than shying away from attributions of animality, de Andrade chooses to politicize (and aestheticize) the animal proximities that have functioned to exclude Recife’s rural poor from dominant society. 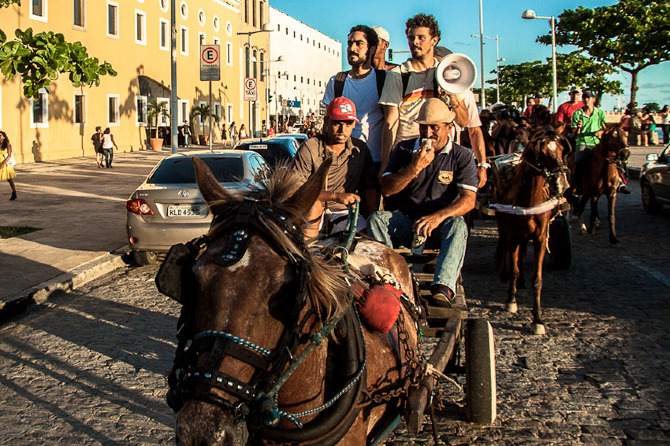 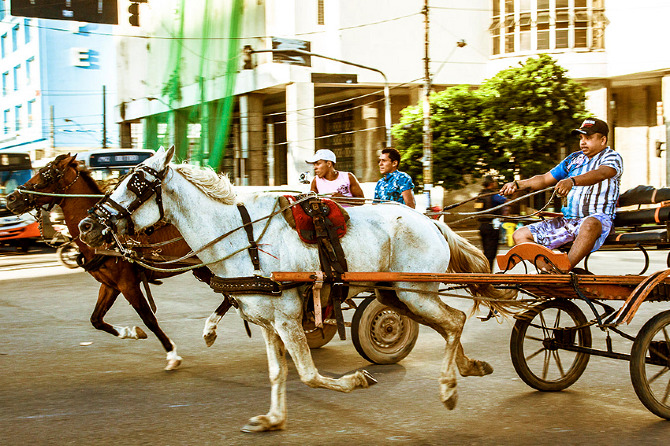 In O peixe, de Andrade interrogates a slightly different tension between documentary, fiction, and spectacle in connection with animality. The video depicts black Brazilian fishermen of the São Francesca River Region diving into the river and catching fish underwater. Afterwards, they intimately embrace their catches as the animals slowly die in their grasp. In the entirely dialogue-free video, multiple men perform the same ritual of catching fish and silently holding the prey to their chests. But these romanticized and sensuous scenes of interspecies encounter are entirely fabricated: indeed, de Andrade actually devised the ritual himself, and simply asked the black fishermen to enact it as if it were one they performed regularly. The fishermen then perform the artist’s imaginary ritual with such virtuosity that the viewer struggles to disaggregate the fictional from the real.

The sequence is punctuated by quiet shots of the natural landscape, evoking an ethnographic documentary style and suggesting the particularity of this fishing tradition to the region in which was supposedly “discovered.” Whereas in O levante, de Andrade’s guile is directed at the municipal authorities, in O peixe it is directed at the viewer, challenging an entrenched willingness to accept the verisimilitude suggested by an ethnographic visuality. In this play on ethnographic aesthetic forms, de Andrade pushes an imagined animal ritual to the limits of plausibility; in doing so, he both mocks and mimics the forms of knowledge production centering around the exoticization of the laboring racialized body. Like in O levante, imagined animal proximities and intimacies regulate the entrance of certain bodies into Brazil’s so-called “racial democracy.” But here, these racializing animalities are revealed not as material effects of neoliberalization, but as the desiring fantasy of a dominant way of seeing that finds its roots in colonial forms of knowledge production. 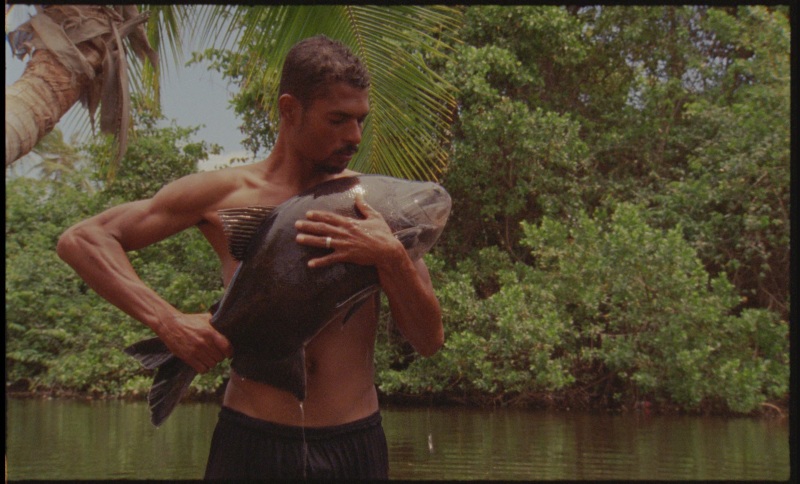 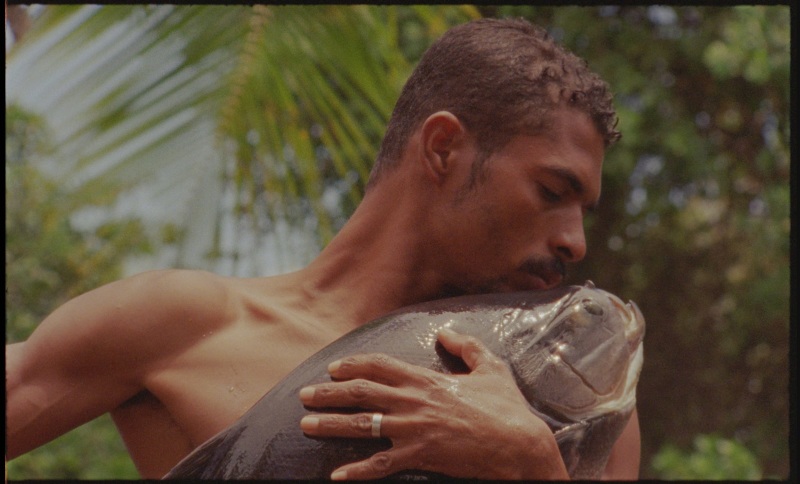 In this regard, de Andrade’s video recalls the animalizing tendencies structuring European colonists’ and travelers’ tales during the Atlantic conquest. In these colonial discourses and visualities, black and indigenous bodies are refused a complete humanness, helping to reproduce the logic that settlers and slaveholders are entitled to racialized bodies as sites of exploitable labor, eroticism, and sexual violation. For example, in his early-sixteenth century account of first contact with indigenous tribes in Brazil, explorer Pêro Vaz de Caminha contributes to a colonial visuality that shuttles these bodies outside a racialized order of the “human”:

You cannot speak in a loud voice or they will flee … from which I deduce that they are like animals, with little reason and thus meek. But in spite of this they take good care of themselves and they are very clean. This is why I think they are more like birds or undomesticated animals whose feathers and furs are made more beautiful by the wind, unlike domestic animals.

As Billy-Ray Belcourt (2015) argues, animalizing settler accounts such as these not only mark blackness and indigeneity as available for conquest, but they also perform “an epistemic violence that denies animality its own subjectivity” (5), thereby gesturing toward the co-constitution of race, animality, and humanistic western subjectivity. Notably, “undomesticated” animality is recoded as a generous designation, as these bodies are still “beautiful” to Caminha even if they cannot be counted as fully human. The sensual interspecies encounter between man and fish that de Andrade concocts in O peixe rehearses these colonial-era fantasies of animality, but it does so at the self-conscious level of artifice. Here, playfulness and guile are deployed to expose the animalizing eroticism connecting the visualities of settler accounts, colonial photography, and ethnography. In turn, the fabricated human-animal intimacy of O peixe is troubled by the very real intimacy de Andrade constructs between the viewer and animalizing technologies of colonial subject formation.

As Julie Livingston and Jasbir Puar (2011) argue, “[M]uch of slavery and colonialism operated through – not to mention foundered upon – legal, medical, intellectual, economical, and political attempts to demarcate boundaries among species” (5). Relevant to an analysis of animalization within histories and presents of colonialism, de Andrade’s video work tracks the association of racial and economic subalterns with proximity to and dependence upon “animal others.” O levante and O peixe both interrogate how the attribution of animality to certain groups serves to consolidate racial imaginaries and legitimize exclusionary models of economic development. In both videos, animality emerges as a ready resource for the elaboration of racial meanings, appearing within neoliberal and ethnographic visualities as a mechanism for ordering humans based on how “animal” they are. Indeed, by marking certain groups as too close or too dependent upon animals, regimes of visuality impose a sense of anachronism, whereby racial others may be unduly scrutinized or excluded from the aesthetic projects of modernity.